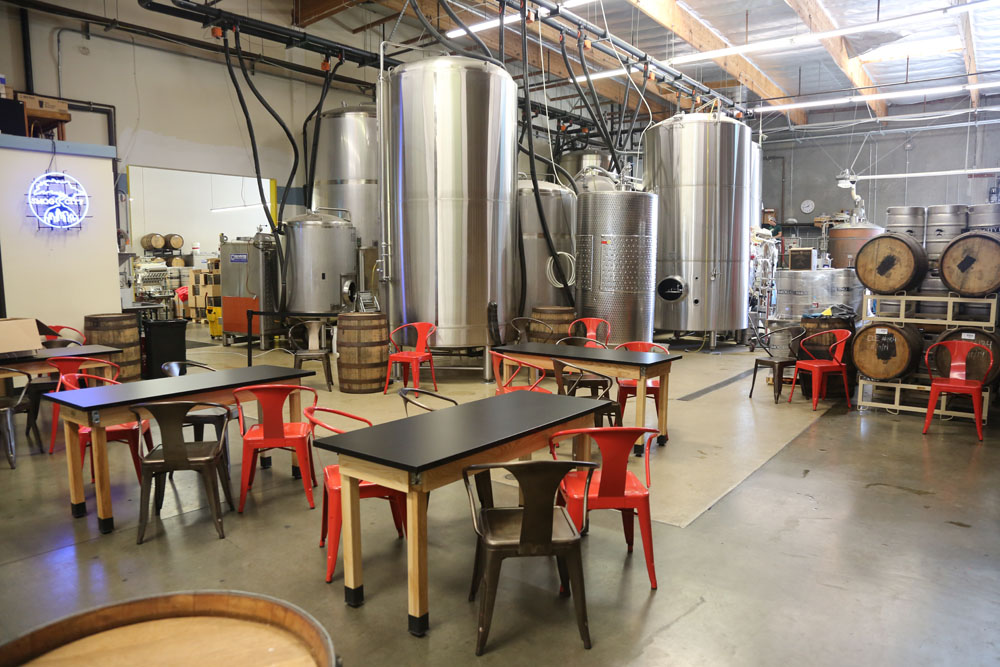 Smog City Brewing started brewing beer in 2011 in a shared space and quickly grew, prompting a move to open their own brewery and taproom in 2013. Smog City brews classic style beers including a Czech style pilsner, IPA, a coffee porter and their hoppy amber ale. They also make limited and seasonal offerings including naturally fermented sour beers. The taproom in Torrance, CA is popular with visitors and locals and in 2018 they expanded their production space and added a new bottling line.

Located in a light industrial district, Smog City Brewing encountered illegal dumping and vandalism around the building which costs them money to remediate. In addition, the taproom is located in a shared space with brewery production which means that visitors are in close contact with the large brewing tanks, pallets of raw materials and stacks of aging barrels. The owners wanted to be able to keep an eye on their business when they were not there and have cameras installed on the exterior and inside the business to protect them in case of an accident or unexpected incident like water damage, theft, or a liability incident like a slip and fall.

Smog City Brewing decided to install a video surveillance system in 2014 which included an OpenEye NVR and six OpenEye cameras. One of the cameras installed was a 360° camera that captures the interior space shared by the taproom and the brewing equipment. After several years Smog City added on to their system with a second 360° camera, four more indoor cameras and upgraded to the OpenEye Web Services platform. “The 360° cameras have been an awesome feature to use within our production facility,” said Jason Briseño, Smog City Brewing Retail Director. “Being able to see the whole cellar and having a view amongst the tanks is a great tool to use instead of needing multiple cameras to cover the same amount of space.”

The brewery owners and select employees have user access to the video surveillance system and use a variety of methods to check on the cameras. Most of the time it is convenient to log in using a web browser on a computer either on or off-site. Single sign-on through OWS makes it easy for them to easily log in from any computer since they don’t have to know the IP address of the recorder. They use the mobile app to access their video about 25% of the time for quick checks to see what is going on at the location. “One small feature we are able to use is the simple fact that bar staff and managers can see how busy the taproom is from inside our offices and can jump out and help the front of house staff,” said Briseño. “Managers can look at the monitor and see if the line is incredibly long and jump in to help. This has expedited service and customers are leaving happy and satisfied.”

The system alerts and reports in OpenEye Web Services help keep the video surveillance operating the way that is should. On one occasion already, OWS alerted their integrator to video loss on one of the cameras which prompted them to contact the brewery to find out the cause. While moving some equipment in the brewing space, employees had to move some wires along one of the walls. Unknowingly the network cable to one of the cameras was unplugged causing the camera to go offline. Without the alert through OWS it could have been weeks before anyone noticed that the camera was down and not recording. It was also a quick fix that the customer could check on and resolve without requiring the integrator to send someone to the site.

"It goes without saying that having camera surveillance with OWS has given our company an incredible sense of peace of mind for our management and employee staff.”

The OpenEye video system is quickly paying for itself, including an instance where they were able to provide video evidence to head off a liability lawsuit. A patron injured themselves while visiting the taproom and the brewery was served with a costly liability lawsuit. With help from their integrator, the brewery owners were able to locate video from the patron’s visit that captured the incident and saved the clip in OpenEye Web Services to share with their insurance provider. After the video was shared with the insurance provider, the lawyers who brought the suit declined to continue the case. “It goes without saying that having camera surveillance with OWS has given our company an incredible sense of peace of mind for our management and employee staff,” said Briseño.

The OpenEye video surveillance solution using OWS is a system that allows the brewery to operate more efficiently and is easy to use for this small independent business without requiring dedicated IT staff.